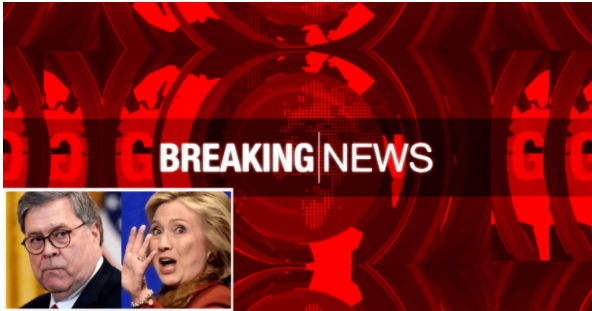 Hillary didn’t think Barr would dare – it’s all out now.

We know the fix was in for the FBI’s investigation into Hillary’s emails.

Top officials like FBI Director James Comey covered it up. He admitted she broke the law, and then said she got off free and clear.

And Hillary thought she would get away with it.

From Sara A Carter:

The FBI failed to document at least four interviews of witnesses in the bureau’s investigation into former presidential candidate Hillary Clinton’s use of a private server to send classified emails, according to documents obtained by the government watchdog Judicial Watch.

Just left them out? I wonder what incriminating information was left out?

According to Judicial Watch, the FBI did not document at least four interviews of witnesses during their Clinton investigation.

That’s highly unusual. Have you ever heard of cops or law enforcement not documenting anything during a case?

Why did the FBI not bother to record these interviews—which might have revealed serious wrongdoing?

Perhaps, they were protecting the woman they thought would become president? If those interviews did condemn Clinton and her staff—then they would have eventually come out.

But if there was never a record of these interviews, nobody would ever know!

That’s pretty suspicious if you ask me.

Former FBI head James Comey admitted Clinton broke the law with her email server. Yet he dropped the case and said they wouldn’t punish her.

Clinton knowingly broke the law and jeopardized the safety of all Americans.

How can anyone overlook all that?

AG Barr isn’t. He’s closing in. Clinton should be getting nervous right about now.

But no one’s going to hear about it and support him because the media are silent on this big development.

SHARE if you want Barr to LOCK HER UP.