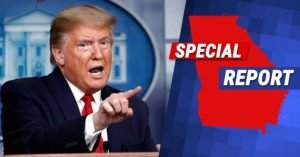 Plenty of stories and allegations have crossed out desk about possible mistakes and problems in this election.

Most states appeared to pull it off without a hitch. But a few key swing states (with Democratic leadership) had “irregularities” that are raising questions.

Democrats in the media have for years claimed that such problems never happened. Yet we recall how badly they screwed up their own Iowa caucuses.

They want us to trust the results of such a major election—but news is coming out that should make every American demand answers.

A glitch in Michigan has flipped the results of one election, completely changing the winner:

An incumbent Republican in Michigan went from losing his reelection race to winning it after officials discovered a “technical glitch” by which the results from seven precincts had been counted twice. Officials responded to the error by urging voters to have confidence in the system…

“But there was a problem: According to Oakland County Clerk Lisa Brown, the total from seven precincts in the city had been reported twice.”

A crucial glitch in the vote-counting software counted one county twice, giving the challenger a winning tally.

Only after it was rechecked did they notice the error and correct it.

According to reports, numerous states use the very same software. Is it out of the realm of possibility that this glitch has occurred in other races?

Are we hearing anything from other election officials of double-checking the results? How can we be sure this “glitch” hasn’t altered other crucial outcomes?

This story out of Michigan throws weight that election tallies can be counted wrongly—even when nobody is trying to do wrong.

But what if other election officials are less than honest?

Shouldn’t we take this story very seriously and demand recounts in close races? Every state that uses this software should be required to check for more glitches.