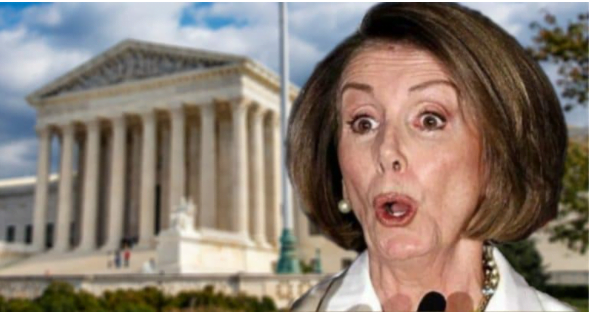 Going into the 2020 election, most Democrats were confident they’d retain the majority in the House. In fact, many predicted they’d add to their majority lead when the dust settles.

But while Democrats did indeed hold the House majority, they actually ended up losing several key seats. Clearly, this came as a surprise to left-wing politicians around the country.

Now, they might see that majority shrink even further.

The Supreme Court is currently considering a case that could have a significant impact on the House races, and if they rule a certain way, the Blue party may face more losses:

The Trump administration wants to exclude undocumented individuals from calculations used to allocate the number of House seats each state receives.

And if the Court sides with Trump’s team, the Democrat advantage might dwindle. Come 2022, the House might even swing back in favor of Republicans.

Via The Washington Free Beacon:

Blue states losing even a handful of seats would make the House’s thin Democratic majority even more precarious.

Congressional analysts suggest Democrats will lose the House in 2022 on the basis of reapportionment alone, since red states with growing populations are expected to gain seat.

The New York Times added that if the highest court in the land rules for the Trump administration, this could “shift political power from Democratic states to Republican ones.”

This could feasibly mark a major turning point in the political atmosphere.

Pew Research recently reported that the country’s unauthorized immigrant population is “highly concentrated.” Most (about 61 percent) live in metro areas, which are typically Democrat strongholds.

It’s reasonable to say a person who ‘lacks permission to be in this country’ is not an inhabitant, Wall wrote, adding that the president has discretion to determine who counts as an inhabitant.

All this comes in the wake of Republicans flipping some critical seats in the 2020 elections. Thus far, the GOP has managed to grab 12 seats for a net gain of 9.

Seven more races have yet to be called, but the Republican candidates are currently leading in all of them.

Therefore, if the Supreme Court does rule for the Trump administration, there might be a serious Red Wave on the horizon.