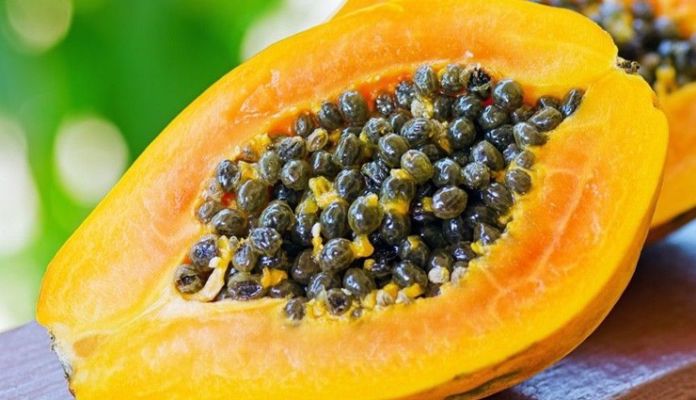 But as the benefits below will attest, incorporating the fruits into your diet can contribute towards better health and, ultimately, lower risk of disease.

While papaya is typically available as chopped fresh or dry fruit, many of its greatest benefits actually come from its seeds. The seeds have a peppery flavor and can be enjoyed raw, dried, crushed, or frozen.

Since they have a strong taste, they’re best taken with a bit of honey or used to season meat or add flavor to dressings and sauces .

Start with 2-3 seeds a day and work your way up to a full teaspoon.

Papaya seeds were traditionally used in Traditional Chinese Medicine to detoxify the liver and body. The fruit was also known to protect against chemically-induced liver damage .

While it’s been documented that papaya seeds are highly beneficial in the treatment of alcohol and malnutrition-induced cirrhosis, studies have yielded mixed results . Still, eating both the fruit and seeds are beneficial for your body.

The seeds and fruit are a digestive aid that can kill harmful amoebas and parasites.

Another study found that the seeds protected the digestive tract from ulcers by increasing mucus production and decreasing gastric acidity .

These powerful seeds contain papain and chymopapain, enzymes that have the ability to lower inflammation and promote healing. In Latin America, a paste made from the seeds was traditionally applied to burns and wounds to speed recovery.

The seeds are also commonly used to benefit asthma, rheumatoid arthritis, osteoarthritis, and other inflammatory conditions.

A study published in African Health Science found that the seeds have the ability to reverse paracetamol-induced kidney damage . Paracetamol, called acetaminophen in North America, is the active ingredient in Tylenol and other over-the-counter pain and fever reducers.

Carpaine, an alkaloid found in the seeds, slows heart rate by reducing blood pressure. In terms of efficacy, it’s even been compared to digitalis, a drug typically prescribed heart patients .

A study published in the journal Nutrition and Cancer examined the chemopreventive properties of the seeds. They found that the seeds’ flavonoids prevented cancer through their antioxidative and anti-inflammatory mechanisms. In particular, the compounds protected both healthy cells and the genetic information they contain .

The seeds are also chock-full of isothiocyanates, compounds that prevent cancer by enhancing the transcription of tumor suppressor proteins . They are most effective against chemically-induced cancers of the lung, liver, esophagus, stomach, small intestine, colon, and mammary gland (breast) .

Papaya seeds are a primitive form of birth control with measurable benefits.

In mouse studies, male mice treated with 20 mg of papaya seeds per kilogram of weight orally for 60 days were found to be significantly less fertile than the control group .

In rabbit studies, animals were given 20mg a day for 150 days. Within 45 days, sperm motility and viability were severely affected. By the 75th day, only 1% of sperm were viable. Researchers found the spermatozoa’s acrosome, midpiece, tail were damaged by the seeds. The heads and tails were also detached on many specimens.

During the study, the rabbits reached a 0% fertility rate without negative side effects or loss of libido. Best of all, the effects were reversible: 45 days after the end of the study, fertility was restored in all subjects .

Although the seeds may help prevent pregnancy, they aren’t foolproof and they do not protect against sexually transmitted diseases, so they should be used alongside conventional contraception.