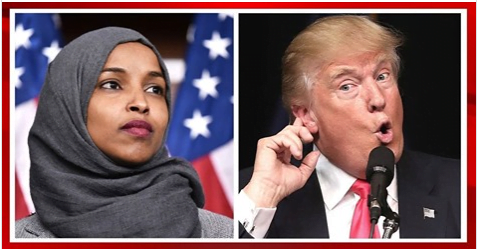 Ilhan Omar hasn’t had a great first term in office, according to Trump and the Republicans.

After the many scandals we’ve brought to you, she’s apparently wrapped up in another one.

An undercover report revealed Democrats in her district were involved in a possible ballot harvesting scheme.

Project Veritas provided the footage, that quickly made headline news.

This is totally illegal. Hope that the U.S. Attorney in Minnesota has this, and other of her many misdeeds, under serious review??? If not, why not??? We will win Minnesota because of her, and law enforcement. Saved Minneapolis & Iron O Range!

President Trump called on the U.S. Attorney in Minnesota to investigate these “totally illegal” allegations.

President Trump called out Rep. Omar, saying she is responsible for many “misdeeds.” He even said that she will help the GOP win Minnesota in November.

Ilhan Omar has not done much to win over Americans.

We can spend all day going over the controversial things she’s said, from criticism of Israel to her apparent dismissal of the victims of 9/11.

Then there are those reports of the turmoil in her personal life. Not to mention those allegations of campaign finance violations.

The Democratic Party appears too afraid of confronting Omar.

When her history of slandering Israel came out, House Democrats were about to issue a resolution condemning it.

Instead, they issued a watered-down resolution that did not mention Omar in the slightest.

Perhaps Omar has learned because of her ethnicity and background, she can get away with whatever she wants.

This new bombshell might kick up a hornet’s nest of controversy. President Trump has accused Democrats of trying to steal the election through mail-in ballots.

Now, a video has emerged that suggests a well-known Democrats’ allies are doing just that.

Can we expect the AG to do something?